What Is a Machine Learning Pipeline?

For data science teams, the production pipeline should be the central product. It encapsulates all the learned best practices of producing a machine learning model for the organization’s use-case and allows the team to execute at scale. Whether you are maintaining multiple models in production or supporting a single model that needs to be updated frequently, an end-to-end machine learning pipeline is a must.

Topics covered on this page

What Are the Benefits of a Machine Learning Pipeline?

It is beneficial to look at the stages which many data science teams go through to understand the benefits of a machine learning pipeline. Implementing the first machine learning models tends to be very problem-oriented, and data scientists focus on producing a model to solve a single business problem, for example, classifying images.

Teams tend to start with a manual workflow, where no real infrastructure exists. The data collection, data cleaning, model training and evaluation are likely written in a single notebook. The notebook is run locally to produce a model, which is handed over to an engineer tasked with turning it into an API endpoint. Essentially, in this workflow, the model is the product.

The manual workflow is often ad-hoc and starts to break down when a team begins to speed up its iteration cycle because manual processes are difficult to repeat and document. A code monolith, even in notebook format, tends to be unsuitable for collaboration.

Characteristics of a manual ML pipeline:

Once teams move from a stage where they are occasionally updating a single model to having multiple frequently updating models in production, a pipeline approach becomes paramount. In this workflow, you don’t build and maintain a model. You develop and maintain a pipeline. The pipeline is the product. 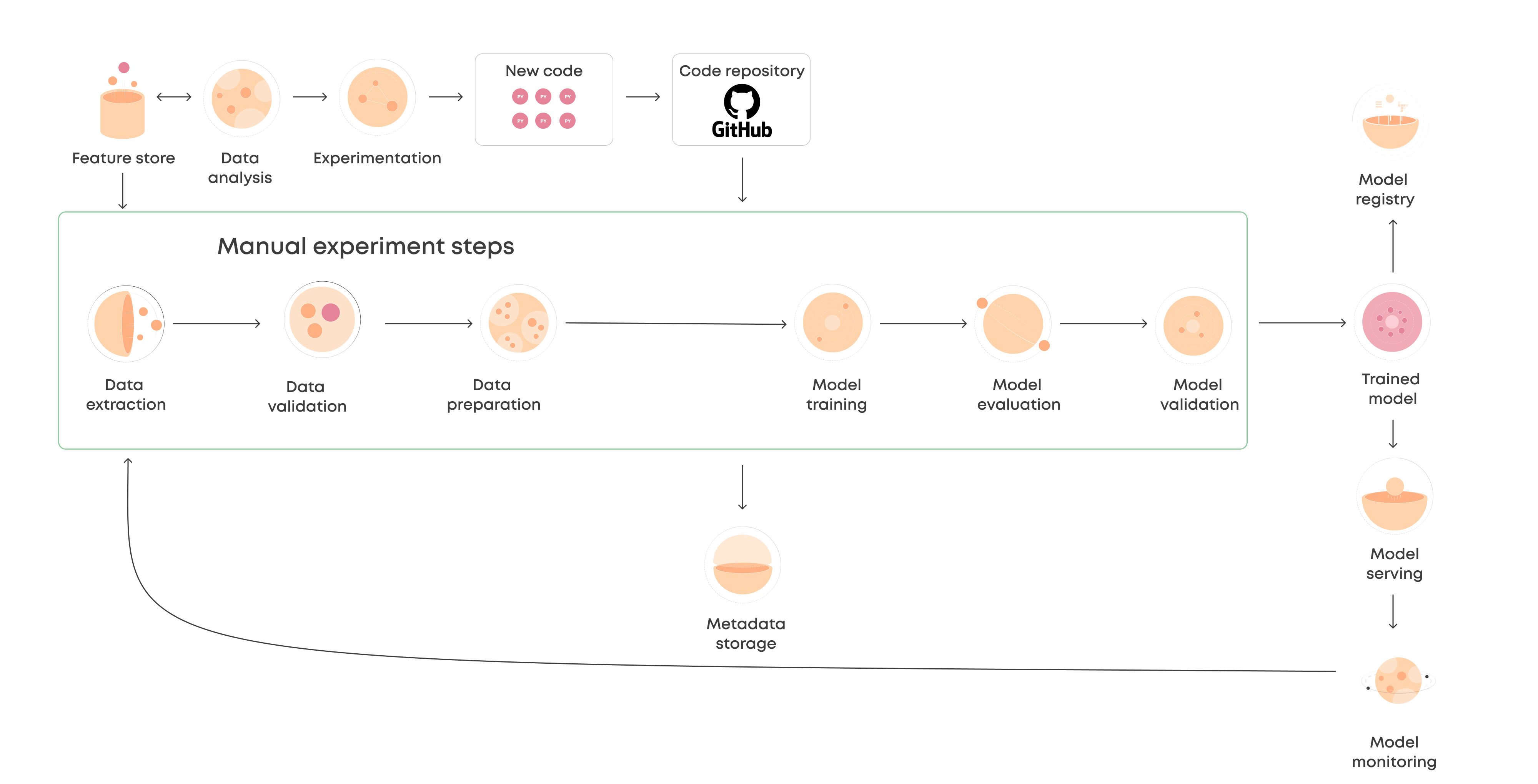 An automated pipeline consists of components and a blueprint for how those are coupled to produce and update the most crucial component – the model.

In the automated workflow, solid engineering principles become more into play. The code is split into more manageable components, such as data validation, model training, model evaluation, and re-training triggering.

The system offers the ability to execute, iterate, and monitor a single component in the context of the entire pipeline with the same ease and rapid iteration as running a local notebook cell on a laptop. It also lets you define the required inputs and outputs, library dependencies, and monitored metrics.

This ability to split the problem solving into reproducible, predefined, and executable components forces the team to adhere to a joined process. A joined process, in turn, creates a well-defined language between the data scientists and the engineers and also eventually leads to an automated setup that is the ML equivalent of continuous integration (CI) – a product capable of auto-updating itself.

Characteristics of an automated ML pipeline:

Transitioning from a manual cycle to an automated pipeline may have many iterations in between depending on the scale of your machine learning efforts and your team composition. Ultimately, the purpose of a pipeline is to allow you to increase the iteration cycle with the added confidence that codifying the process gives and to scale how many models you can realistically maintain in production.

What to Consider when Building a Machine Learning Pipeline?

As stated above, the purpose is to increase the iteration cycle and confidence. Your starting point may vary; for example, you might have already structured your code. The following four steps are an excellent way to approach building an ML pipeline:

In addition, the pipeline also has static components like:

How to Build a Machine Learning Pipeline with Valohai?

The beneficial consequence of using DAGs is that every node executes once and only once. It means that every single node only has one set of inputs and outputs per running pipeline. This makes the pipeline simpler to define, understand, and debug.

Valohai pipelines are defined through YAML. You specify steps and connections between them.

Here is an example pipeline that:

A single step in a graph represents a cloud machine running your code once.

For each execution of a step, Valohai does the following:

A single connection in the graph represents data flow. The data flows from one step to another, and Valohai handles the data transfer for you. There are two types of data flows:

Haven't heard of Valohai yet?

Valohai is the last MLOps platform you'll ever need. The platform allows you to build end-to-end ML pipelines that automate everything from data collection to deployment while tracking and storing everything.