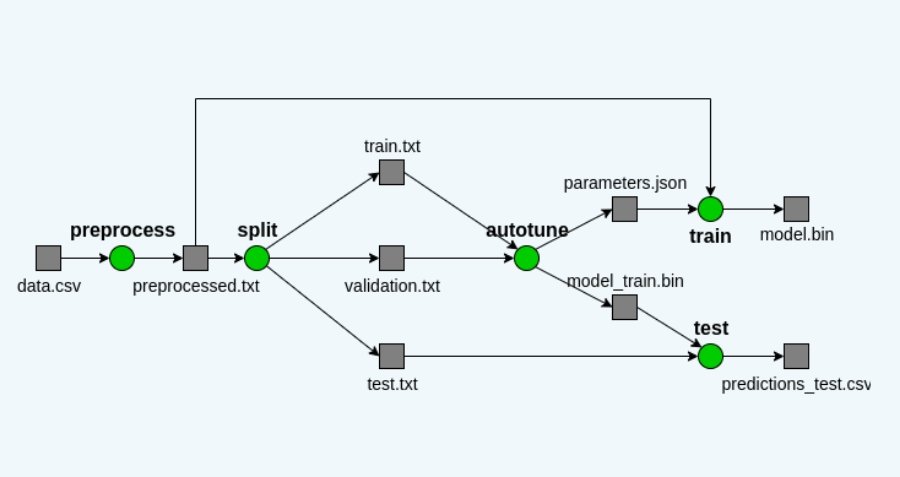 This article focuses on architecting a machine learning pipeline for a common problem: multiclass text classification. The pipeline takes labeled data, preprocess it, autotunes a fastText model and outputs metrics and predictions to iterate on.

All the code is available in this Github repository . I use Valohai to create a ML pipeline and version control each step. In the end, you can run the pipeline on the cloud with a few clicks and explore each intermediary result.

How ML in Production Differs from a Kaggle Competition

When competing on Kaggle, you work on a defined problem and a frozen dataset. You have an idea of what a good result is based on the leaderboard scores.

In real-world applications, datasets evolve and models are retrained periodically . For example, in text classification it’s common to add new labeled data and update the label space. Metrics and optimal parameters will change.

In machine learning you deal with two kinds of labeled datasets: small datasets labeled by humans and bigger datasets with labels inferred by a different process.

In practice, training on a small dataset of higher quality can lead to better results compared to training on a bigger amount of data with errors . At least, s maller datasets and simple algorithms are easier to debug and faster to iterate on.

To architect the ML pipeline I use a dataset of 2225 documents from BBC News labeled in five topics: business, entertainment, politics, sport and tech. The dataset assigns a single label for each document, which is known as a multiclass problem.

You can run the pipeline on any CSV file that contains two columns: text and label . If you want to train it for a multilabel problem, you can add two lines with the same text and different labels.

Facebook released fastText in 2016 as an efficient library for text classification and representation learning. Some of the benefits reported on the official fastText paper :

In 2019, Facebook released automatic hyper-parameter tuning for fastText that I use as one of the steps in the pipeline.

You should start by writing a function for each ML step. Common strategies to industrialize machine learning executions include:

I have a background in web development and data engineering. I am used to writing CLIs and prefer avoiding learning a new pattern for each new practice. To create CLIs I use Click , a popular Python library that decorates functions to turn them into commands.

I create a command for each ML step. Each command takes data and parameters as inputs and generates data and metrics as outputs . All the code is available on the arimbr/valohai-fasttext-example repository in Github.

For example, the autotune command trains several models on the train split to find the best parameters on the validation split.

The get_input_path and get_output_path functions return different paths locally and on the Valohai cloud environment. The train_supervised method accepts arguments to limit the duration of the training and size of the model. The best parameters are saved to later retrain the model on all data.

To execute the autotune command in the cloud, I declare it in the valohai.yaml.

A Valohai pipeline is a version-controlled collection of steps represented as nodes in a graph. Each data dependency results in an edge between steps.

The text classification pipeline has 5 steps:

Similar to executions, pipelines are declared in the valohai.yaml file in two sections: nodes and edges.

Once you have declared a pipeline, you can run it and inspect each pipeline node by clicking on it. Below you can see the details of the autotune node.

Valohai pipelines are declarative, making it easy to integrate with your code. If you require dynamic pipelines you can integrate Valohai with Apache Airflow .

The data lineage graph displays the data dependencies between executions and artifacts. In Valohai, you can trace each dependency to debug your pipelines faster.

Iterating on the problem, data and model

The autotune step was key to achieve good results. The F1-score went from 0.3 with the default parameters to a final F1-score of 0.982 on the test dataset . Intermediary results are logged by the fastText autotune command and can be read in the Valohai logs. The final score is logged in JSON and stored by Valohai as an execution metric.

But only looking at a metric is not enough to know if your model works well . The most interesting information is in the test_predictions.csv file. It contains the 4 errors made by the model on the test dataset of 222 records.

The 4th error assigns a higher probability of 0.59 to the business label than the politics label with 0.39. Exploring the whole text reveals that the article talks about both topics. That observation may lead to iterating on the problem to become multilabel and assign all labels above a probability threshold.

If the final metrics are not satisfactory for your business case, new features can be added and a different model trained . But I would argue that is better to start with getting the problem and data right. Those are the ingredients of your ML pipeline.

Trying fastText on your own dataset with Valohai

It's easy to run the pipeline yourself. The following button will invite you to register/login to your Valohai account and create a project to try this pipeline.

After you have created a new project, to run the pipeline on the default data:

Congratulations, you've run your first ML pipeline! You can now try it with your own data to get a baseline for your text classification problem.

To run the pipeline on your own data:

Conclusion and next steps

Organizing your ML code in multiple steps is important to create machine learning pipelines that are version controlled and easy to debug. CLIs are a popular choice for industrializing ML code and easy to integrate with Valohai pipelines.

For common problems such as text classification, fastText is a powerful library to build a baseline fast. With Valohai you get a version-controlled machine learning pipeline you can run with your data.

In the following article, I'll add the extra steps to test the ML pipeline before releasing a new version and monitor the model predictions.